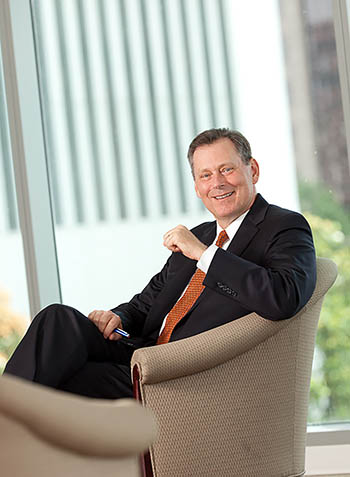 Mark has more than 30 years of management experience with several Fortune 500 companies. He is a seasoned leader with a broad commercial and operational background, and extensive international experience leading global businesses. In 2013, he created Naxos Consulting Group positioned to drive people and businesses to maximize their true potential. In addition to Naxos, Mark has developed strategic partnerships and supports two global consulting firms–Brimstone Consulting focussed on leadership alignment and coaching, and 80amps Enterprise focussed on innovation and growing companies.

Most recently, he was Senior Vice President and a member of the executive leadership team at MeadWestvaco (MWV), a paper and packaging firm. He led several of MWV’s packaging businesses including Beverage, Beauty and Personal Care, and Home and Garden. He was responsible for MWV’s significant European business. During part of his tenure at MWV he was responsible for their emerging markets strategy, with particular emphasis on China and India.

During a 24-year career at Kimberly-Clark Corporation he held a variety of operations, sales and marketing, and general management positions in North America and Europe, culminating with his leadership of Kimberly-Clark Professional, the corporation’s largest business-to-business division.

Mark believes in serving his community to make it a better place and currently works with several non-profit organizations including Virginia Commonwealth University’s College of Humanities and Sciences Advisory Board and Executive Athletic Board, Children’s Museum of Richmond, Heart of Virginia Boy Scout Council, Friends Association, Richmond Alzheimer’s Association, Richmond Association for Corporate Growth, Michael Robinson Foundation, and the University of Maine Pulp and Paper Foundation.

Mark holds a BS degree in Chemical Engineering from the University of Maine, and a MBA degree from Harvard Business School.